Earlier this year I had dinner with friends for some good, old-fashioned male bonding. And like many instances when friends get together…

They all complained about their significant others.

Many of their issues were minor; they were small annoyances that had built up over time. Some of them were frustrations that indicated greater underlying problems in the relationship.

At one point, a friend turned to me and asked, “How come you never say anything about your wife?”

I replied, “If something’s bothering me, I tell her. We’re not perfect and we have our own set of problems, but we always try to work through things together.”

I could see surprise and denial in his eyes. He believed me, but also believed that that wasn’t going to work for him.

When I asked if he’d talked about his concerns with his girlfriend, he said no. He made excuses like, “She’d never listen to me.” or “It’s been going on too long now and it would be awkward to bring up.”

Sadly, this is the attitude so many people have. They refuse to talk to their partners about their relationship problems and instead share their frustrations with friends and family.

I’m here to tell you that venting to other people about your partner is NOT a healthy practice. It’s inconsiderate, destructive, and only showcases your insecurity within the relationship.

“But I have to complain to someone.”

Maybe you think I’m overreacting. Maybe you feel like you have valid arguments for talking to friends about your relationship woes, such as:

You want to please your partner. Even though you have disagreements or they do something that annoys you, you don’t think it’s a big enough deal to tell them. As long as you just let them be, they’ll be happy. In turn, you occasionally complain about these quirks to other people to get them off your chest.

You want to avoid conflict. Maybe you’ve tried addressing some issues and it ended in a heated debate. Nothing came from it. So you feel it’s best to just avoid that and deal with those problems by talking through them with other people.

You just need to blow off steam. I understand — sometimes you’ve had a bad day, your partner gets on your nerves, and you just need to get your feelings off of your chest. A few minutes talking to some buddies makes you feel all better.

You think it gives you something to talk about and bond over. When you’re making new friends, complaining together can be an easily shared avenue for discussion. With old friends, it’s so common for everyone to catch up and then dish the dirt on their romantic lives. It makes you feel connected, supported, and like people get you.

These all seem like real reasons to gossip, right? Sure, they may make you feel better for a little while.

But the issue is that they’re all temporary fixes that won’t provide long-term solutions. Worse, they also create new, deeper problems for you to deal with. Like…

You complain to try and deal with your relationship. You feel relieved and ignore your qualms with your partner…for a while. But you haven’t actually worked together to address and fix those issues.

So those problems, big and small, linger. They gnaw at you. They test your patience. They eventually boil up until they’re all you can think about.

You think…maybe they don’t care enough to change. Maybe they’re not as compatible with you as you thought. Maybe they’re doing it to secretly piss you off.

So now you’ve gotten yourself all worked up with anger and blame, when you haven’t even given them a chance to know the truth about how you feel. You’re telling yourself stories about their motives and resenting them for it when it could just be ignorance.

Sometimes this escalates to massive fights where you unfairly attack your partner for everything you’ve been holding in. This can be devastating to the other person when they realize you’ve been secretly upset with them and can even lead to the unnecessary end of a relationship.

A good friend once told me, “Never be mad at your partner for something they don’t know they’re doing.”

Then your friends start to resent your partner, too

But the resentment doesn’t stop there.

When you’re bad mouthing your partner to friends who care about you, they only get one side of the story. They see all the faults in your partner and get mad at them along with you. They speculate about your partner’s intentions and make up stories that only add to your frustration.

It’s not fair to depict your partner so negatively to people who may know you both for a long time. You’re not giving them a chance to defend themselves.

And your loving friends will give you advice based on their jaded perspective. They’ll jump to terrible conclusions and often tell you to make rash decisions.

How do you think that will turn out?

Really consider what you’re venting about before you have all your family and friends thinking, “You deserve better than that man/woman!” for the rest of your life.

And if you don’t stop, you can ruin a good thing

Worst of all — what happens when word gets back to your partner that you’ve been talking bad about them behind their back?

The people you tell will slip up or gossip. Or they’ll try to fix things on your behalf. They may even try to have a “talk” with your partner or treat them differently.

Let me assure you, once your partner inevitably finds out…

You will crush them.

How do you expect your partner to trust you again?

You’ve betrayed them and they’re forever embarrassed because of everyone you’ve told.

If you really care about someone, evaluate what this gossip is worth to you. Because with one wrong move, you may just lose that special someone over something stupid.

Who you need to talk to instead 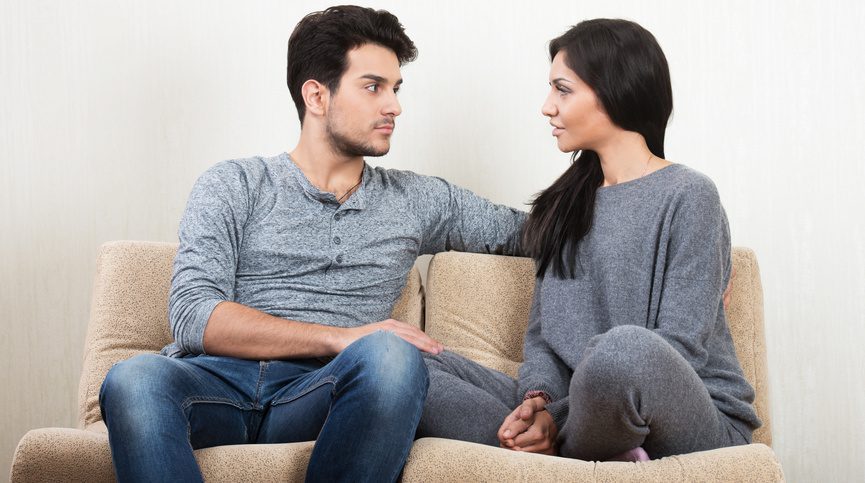 So if you shouldn’t complain about relationship problems to your friends or family, who should you talk to?

I think you know where I’m going with this…

You have to become a better communicator with them. And they have to do the same for you.

Mutual respect is the ONLY long-term solution.

You need to work through things and grow together to sustain a healthy relationship.

That means having uncomfortable moments where you’re vulnerable with each other. Learning to address hot-button issues without breaking into arguments. Trying to not attack the other person when your ego is bruised. Dropping your pride when it means resolving a problem.

That means speaking up early on when you notice something that bothers you. Not letting stuff build up. Setting healthy boundaries and expectations. Seeing things from the other person’s viewpoint. Finding compromise. Reading great books like Crucial Conversations on dealing with tough talks for the betterment of your connection.

That could mean finding someone you BOTH agree to talk to, if necessary. That could be a counselor or a friend acting as a third-party mediator.

But that’s still a supplement to you working on your communication together.

No one is saying this is easy or an overnight change. In fact, maintaining that respect challenges your security, forces you to be more open-minded, and can be emotionally draining. It may be the hardest thing in a relationship to follow through on. But it’s also the most important.

You need to fight for healthy communication from both sides.

There’s no excuse to handle your relationship any other way.

So if you care about your loved one, please talk to them instead.